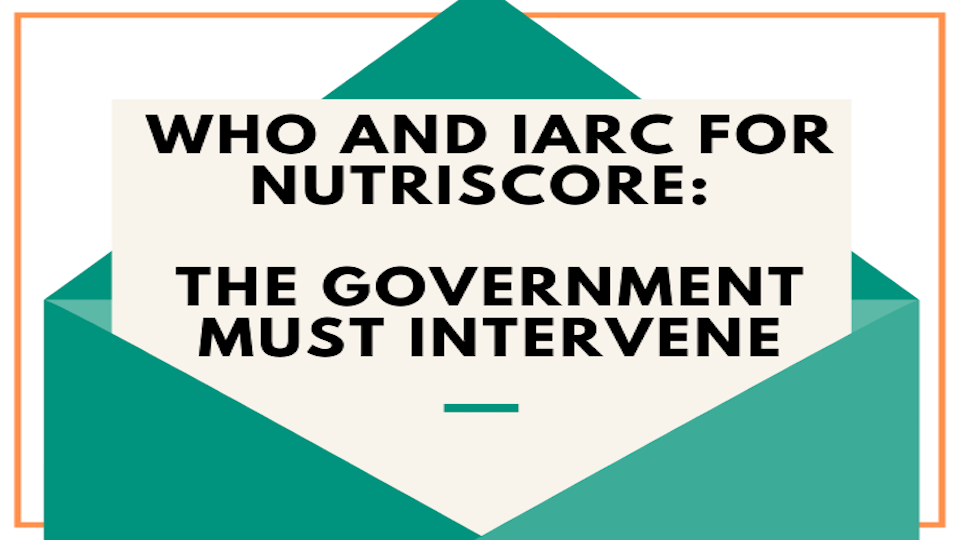 Following a recent report by WHO and IARC in support of Nutriscore, I wrote on behalf of Competere an open letter to the Minister of Health Mr. Speranza, the Prime Minister Mr. Draghi, and the Minister of Agricultural Policies Mr. Patuanelli.

See the full letter here >>> or here below.

it is our institute’s duty – as a promoter of scientific research for innovative and sustainable policies – inform your Government of an event that risks to undermine the science and the authority of the institutions that represent it on the international stage.

The World Health Organization (WHO), through the International Agency for Research on Cancer (IARC), has recently published a new report titled “The Nutri-Score: A Science-Based Front-of-Pack Nutrition Label”, promoting Nutriscore as a label that steers consumers toward healthy food choices and, therefore, toward a reduced risk of developing non-transmissible diseases like cancer.

However, both the title and the conclusions of the research are misleading, as no study has been conducted on the correlation between Nutriscore, food consumption patterns, and the diagnosis of non-transmissible diseases. The report is instead based on the EPIC (European Prospective Investigation into Cancer and Nutrition) project which has been tracking food consumption and medical history of over 500 thousand European citizens since 1992. Back in 2018 another article was published, where the French nutritional profile FSAm-NPS was retroactively applied to foodstuffs consumed by EPIC subjects to correlate healthy products consumption with a lower probability of developing cancer. Because FSAm-NPS is the algorithm upon which Nutriscore is based, both the article and IARC conclude that Nutriscore is the most effective label in the fight against cancer.

Thus, several doubts arise regarding the validity of such thesis. First of all, no research upon which the report is based actually puts in direct correlation the Nutriscore label with the diagnosis of non-transmissible diseases. Nor could it, as the label was only developed in 2017 and even more recently implemented. One cannot know if or how consumption patterns among EPIC participants would be influenced by the presence of a Nutriscore label on food products, rendering any conclusion on this subject completely speculative. Furthermore, the 2018 study is not comparative and does not weigh any other system of nutritional evaluation against FSAm-NPS: as such it cannot conclude that other labels are less effective than Nutriscore in the fight against cancer.

The implementation of a front-of-pack nutritional label is a matter that isn’t only politically topical but also – and most importantly – medically relevant. It is therefore fundamental that the debate around it will be based on solid scientific evidence. Rather it should not be based on speculative conclusions, especially when it promises to benefit consumers against terminal illnesses. It is most surprising that today the IARC official websites opens to an image of Nutriscore. It’s without context nor mention of the report’s title, signaling a sudden and final endorsement.

For all these reasons reasons mentioned above that we turn to you, Mr. Minister, so that light may be shed upon WHO’s and IARC’s stance. A strategic choice that does not seem to have been made on any scientific basis. Nor it was no based on the collective decision-making process that should underpin the work of any governing body. This event risks to set a precedent on delicate moment, with the Farm to Fork Strategy on the table. Making a significant impact on international policies aimed at making both nutrition and food education more sustainable through collegiality and shared objectives.