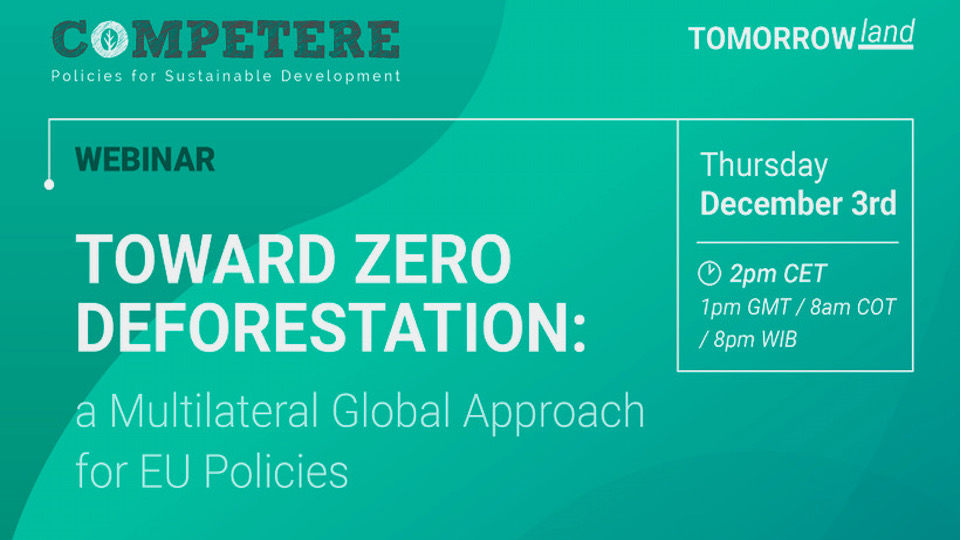 Toward Zero Deforestation: a Multilateral Global Approach for EU Policies

The seminar aimed at investigating the concept of deforestation as interpreted in different parts of the world to provide the EU, in view of the Farm to Fork and the new strategies to combat it, with a multilateral approach. We also discussed about different ways to counteract deforestation through the Colombian and Indonesian experiences. In the end, we mentioned labelling issues, to understand if a “Zero Deforestation” label might be plausible, or which other tools can be used to promote increasingly sustainable global supply chains.

DEFORESTATION IS A MATTER OF CONSUMPTION

As far as deforestation is involved, we must understand its undeniable bond with consumption. Increasing land is required to feed an ever growing population across the world. The well known projection of global population to 2050 is therefore a background that must be taken into account when enacting policies towards a comprehensive sustainability. European Union reforestation is a positive sign of the increasing attention that European policy makers are putting on ecosystem preservation and protection. Nonetheless, if European countries can afford to not convert woods into agriculture fields is because products related to deforestation are always more imported from outside. From other producing countries. “EU is deforesting an area big like Portugal every year”, says Tommaso Chiti, researcher at the University of Tuscia, in Viterbo.

THE NEED FOR SUPPORT

In order to fight deforestation, developing countries are putting in place several measures. From the FLEGT license, of which Indonesia has been the first State to take part into the initiative, to the Colombian “smart mix of measure” which allows the country to lessen its impact on the deforestation. A common stance has been the need for support by developed countries in order to enable less developed ones to enact the real change in sustainable management of the forest resources. The theme that European authorities should focus on, while thinking about sustainability policies related to other countries, is the need to produce more efficiently. And technology might be an answer to this need.

WHAT’S IN FOR THE EU COMMISSON?

The European Commission, which is managing these reforms under the European Green Deal framework, must understand its responsibility to address sustainability challenges on a comprehensive point of view. No protectionist policy will prove effective. Partnerships between producing countries must be taken into account, in order to enable them with the right conditions to protect forests and ecosystems. Moreover, the EU must secure that too stricter standards will not divert products toward other markets which do not require the same conditions. In the end, the Eu should understand that the less internal production (meaning more forests protected) will certainly mean to import more deforestation. This will be even worse when certain goods are produced just by few countries which already have issues related to ecosystems and forests degradation.